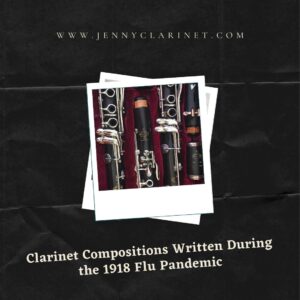 The last few months have been pretty depressing, to put it lightly. Life seems as if it’s been temporarily put on hold as the world anxiously awaits to see what happens next.

Despite what some are saying, music isn’t cancelled and creativity isn’t dead. I know this can be hard to believe since all auditions, concerts, and performances have been postponed, rescheduled, or outright cancelled for the foreseeable future.

Despite all of the horrible news constantly bombarding us, it is so inspiring to see how musicians are using technology in new and creative ways. I’ve seen so many artists share resources and tools to help others in these times of hardship, and I hope we carry this entrepreneurial spirit into a brighter future.

Igor Stravinsky’s L’histoire du soldat. This famous work was written while Stravinsky stayed in Lausanne, Switzerland during the outbreak of the 1918 influenza. This 60-minute theatrical work is for septet, three actors, and dancers, and five sections later became a concert suite arranged for violin, clarinet, and piano. The libretto was written by C. F. Ramuz, and the production was funded by philanthropist and clarinetist Werner Reinhart (to whom the piece is also dedicated). After its premiere in Lausanne on September 28, 1918, Stravinsky planned to take this work on tour, but his plans quickly changed when the influenza reached Switzerland and he contracted it in early 1919. It should also be noted that Stravinsky was simultaneously dealing with the death of his brother, World War I, and the Bolshevik revolution. (Note: Stravinsky also wrote Ragtime for eleven instruments (including clarinet) during the 1918 pandemic.)

Béla Bartók’s The Miraculous Mandarin. While composing this piece in October 1918, Bartók fell ill with a terrible case of the flu, and he stayed in bed for over 20 days. He described how he felt as if “small ants [were] scratching and causing an irresistible itching in depth of my ears.” After recovering, he worked on this ballet until its completion in 1924. Although this isn’t a clarinet piece per se, any orchestral clarinetist is well-acquainted with the three monumental clarinet cadenzas throughout this work. This scandalous story was blocked by the government, and it didn’t premiere until 1926.

Darius Milhaud’s Sonata for Flute, Clarinet, Oboe, and Piano, Op. 47. French composer Milhaud was in Brazil in 1918 serving as secretary to Paul Claudel, who was the French ambassador to Brazil at the time. This piece was partially inspired by the death Milhaud witnessed all around him, which he describes in his memoir Notes Without Music: “The supply of coffins gave out, and you constantly saw cartloads of corpses that were thrown into the common graves in the cemeteries.” In this piece, the second movement is titled “Douloureux” (painful) and is reminiscent of a funeral march, perhaps in homage to the victims of the pandemic.

Francis Poulenc’s Sonata for Two Clarinets, FP 7. Written and premiered during the first half of 1918, this six-minute duo is dedicated to Édouard Souberbielle. This duo is for clarinets in B-flat and A and features different meters in parts of the opening movement.

Larry Shields’ and Henry Ragas’ Clarinet Marmalade Blues. This famous Dixieland jazz number was written in 1918 and originally recorded by the Original Dixieland Jazz (sometimes spelled Jass) Band, the group that made the first commercially-available jazz recordings. The recording of Clarinet Marmalade Blues featured Shields on clarinet and was released in 1919. Unfortunately, Ragas died from the flu’s effects before this recording was released.

Artie Shaw caught the flu when he was eight years old, and doctors told his family that he wouldn’t survive. His father Harold (“Harry”) gave him a dose of castor oil, and Shaw remembered slowly recovering.

American virologist Jeffery Taubenberger (b. 1961) “was the first to sequence the genome of the influenza virus which caused the 1918 pandemic.” In his free time when he’s not making important strides in virology, Taubenberger plays clarinet, oboe, and English horn.

Music in the Time of Pandemic: Brilliant Compositions Written in the Years of the Spanish Influenza

Artie Shaw, King of the Clarinet: His Life and Times by Tom Nolan.